Some people come into our lives, leaving footprints on our hearts, and we are never the same. 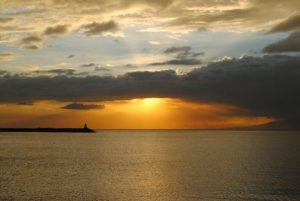 In 2016, cremation surpassed traditional burials for the first time in the United States. In 1970, just 5 percent of people opted for cremation. Currently, over 55 percent of those who die will be cremated, and by 2030, that number is predicted to rise to 71 percent. The main reason people are being burned instead of embalmed? Cremation is less costly, averaging a third as much as a regular burial. It also saves natural resources, like land for a burial, chemical used during embalming and wood or steel for a coffin.

People are going for more personal rituals, breaking rigid customs that became the norm in the 20th century. Cremation is leading, green burials are growing and there is a return to, home funeral ceremonies.

As a funeral celebrant, I work with a family to conduct a ceremony tailored to the beliefs, values, and desires of a deceased loved one with his or her immediate family members. Such services might or might not include aspects and components of traditional religious ceremonies, funerals, or burials.

A memorial service or “celebration of life service” may be personalized in many creative ways. In our initial consultation, we will discuss the ways in which to facilitate this. Family and friends are encouraged to share their voice memories shared.

Having conducted interfaith/multi-faith ceremonies for over twenty years, I’m skilled in crafting a ceremony of all religions and non-religious ceremonies. Crafting a custom ceremony that is meaningful, tender and memorable.

Whether you want a service that is indoors or outdoors, a memorial that is religious or non-denominational, I’m dedicated to assisting you in giving expression to the richness and beauty of a life that was like no other.

Being a funeral celebrant is a calling, to assist others, to mark and celebrate pivotal moments of life.