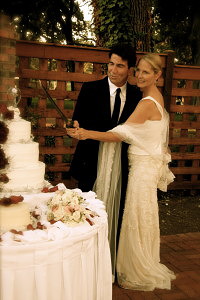 Many of today’s popular wedding ceremony and reception traditions can be traced to ancient Egyptian and European customs.

Many of these were based on symbolism, superstition, folklore, religion, and the early belief that evil spirits could bring disease and death to newlyweds and crops.  The focal point of many farm-based early cultures.

Popular acceptance of these early wedding traditions flourish even in today’s modern weddings.

Left Side Of The Groom – According to various sources, some of the early marriages were literally carried out by the Groom and his Brides Men or Brides Knights, who would kidnap a woman (the origin of “carrying a Bride over the threshold”) from another tribe!  The Groom and his fellow conspirators would then fight off the female’s family of tribesmen with swords held in their right hand while the Groom would hold the captured Bride in his left hand which was the origin of why a “Bride stands on the left side of the Groom” at the wedding.

Honeymoon – After a successful capture, another politically correct practice was for the Groom to hide his new Bride for one month for mating purposes.  “Honeymoon” was created to describe this one month cycle of the moon when they would drink a honey sweetened alcoholic brew that affects both sobriety and the acidity of the womb thus increasing fertility.

Dave and I were very happy with our wedding ceremony.  The flower ceremony was exactly what we wanted and people complimented us on it, and on your choice of words as well.  You were a perfect officiant. Thank you so much!  Best Wishes, Liz & Dave