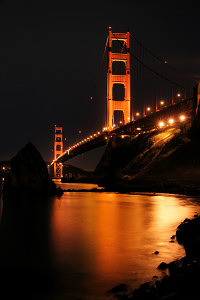 A City Of Names

San Francisco was originally called Yerba Buena, a Spanish name meaning “good herb” or “good grass.” “Baghdad by the Bay” coined by columnist Herb Caen, and “The City that Knows How” are among the common nicknames of the city.

San Francisco is one of the richest cities in the world. It ranks fourth in the world, after New York, Moscow and London, in terms of the numbers of billionaires that call it home. This is despite the fact that it has less than 10% of the population of the other three cities. San Francisco is also known for having the largest Chinese community in the world, outside of China.

The Bridge Too Long To Paint

San Francisco is home to the Golden Gate Bridge. Established in 1937, it’s the world’s second longest single span bridge. It links San Francisco with Marin County and the Redwood Empire. The Golden Gate Bridge is continuously painted and repainted all the time, because the bridge is so long that by the time the paint crew gets from one end to the other, it’s time to start over again.

So feel comfortable to come in your jeans, have a cookie and enjoy the wonders of the city.  It may be just the place to get married.  Start here.