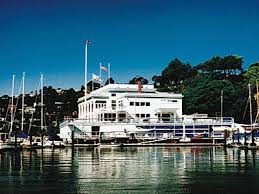 The Corinthian Yacht Club setting is truly spectacular, with its sweeping view and great panoramas of the San Francisco bay. It is a prime waterfront wedding location.  A Marin landmark featuring a Colonial Revival building with a shimmering white façade and soaring 40-foot columns. “Location, location and location.”

The club welcomes private events hosted by members and non-members alike. Bridal parties can take over the entire second story, an ensemble of four distinctive spaces that flow together beautifully. People love to circulate here, knowing that each area they stroll to presents its own visual reward. Start with the Grand Ballroom, a redwood-paneled room with a 22-foot-high ceiling, large stage for musicians, imposing stone fireplace, and an oak floor that’s ready for dancing.

The adjoining Sun Porch, which runs along one side of the ballroom, affords unobstructed views of the main dining area as well as a dramatic bay vista through giant picture windows. With such an impressive backdrop, the Sun Porch is also a favorite site for the cake cutting. It accesses an outdoor deck that not only presents a fine harbor and breakwater view, and can function as a bar or reception space, too. Both the deck and Grand Ballroom have doorways to a separate cocktail area with a granite-topped bar and a collection of nautical-motif plaques, pendants and photos that create an enjoyable yacht-club feel.

The Corinthian Yacht Club is a unique Bay Area venue located on the water’s edge. Ceremony capacity for the enclosed Sun Porch accommodates 115 seated with 15 standing. Reception capacity in the Ballroom seats up to 185 guests with a dance floor and 200 without, additional 50 on the adjoining Sun Porch.

Services Offered By My SF Wedding

Romantic memories come to life in this unique setting tucked into a quiet corner of Marin County just 25 miles north of San Francisco.  Recently totally renovated Peacock Gap Clubhouse provides gorgeous views of south Marin County. The winning aspect here is the architecture and appearance of the new clubhouse.  What a spectacular improvement, the newly designed clubhouse is big, airy, has gorgeous views of the golf course and the surrounding hills. The Clubhouse and Restaurant are brand new.

The Clubhouse offers a perfect site for a stunning outdoor wedding or elegant indoor affair. A striking lobby greets your guests upon arrival. The beautiful and spacious indoor salons are surrounded by floor-to-ceiling windows that boast gorgeous views of south Marin County and open to the spectacular trellised deck and event lawn, providing the perfect indoor/outdoor wedding ceremony and reception venue.

For intimate groups of less than 100 to large gatherings of up to 1,200 guests. Well-appointed groom and bridal suites are also provided.  Culinary services include customized menus and delicious cuisine prepared by our team on site, dedicated to making your wedding relaxing and unique.

All services are offered for this venue.  Officiant services can be ordered alone.

“Golden Gate Bridge at night” by Jawed Karim – Own work. Licensed under CC

The views of San Francisco from Marin County will live in your memory forever.  Here are some of my favorite venues that look back at this magical city.

The Inn Above Tide – Sweeping Views of The Bay 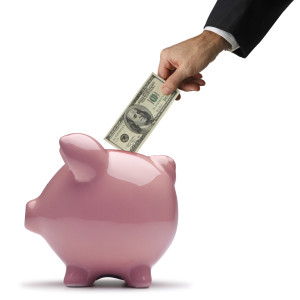 $100 Savings On Any Package

Final Payment is due 30 days before your wedding. 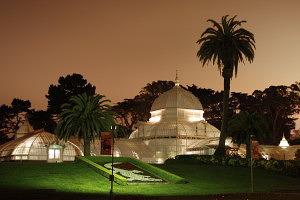 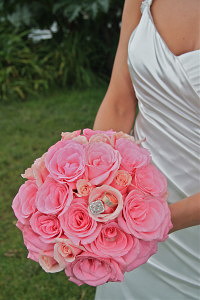 Love Is In The Air During Engagement Season

One third of couples get engaged from November to February. The Holiday season from Thanksgiving through Valentine’s Day.  The average American engagement is 16 months.

On average, couples are spending just under $5,200 on the ring. Round diamonds are the most popular cut for brides overall.  Customization is even more popular with the Luxury Ring segment as more than half (59%) choose to incorporate custom design elements. White gold is still the most popular wedding band metal.

New Trend The celebs are doing it; you can also consider a colored stone for your engagement ring. Whether you choose a sparkling emerald like Halle Berry or a fabulous sapphire like Princess Kate, you’ll feel star-worthy each time you gaze at your finger.

If you’ve ever seen the movie Blood Diamond you know that there’s a much larger price to pay for diamonds than what’s listed on the tag at the jewelry store. There are plenty of stones aside from diamonds that make beautiful engagement rings. If you’re set on a diamond, make sure your stone is conflict-free by asking your jeweler about a diamond’s history. Ask to see the stone’s Kimberley Process certificate—a document that’s included with diamonds that are mined and shipped in a humane way. Two-thirds of newly mined gold comes from open-pit mining, which is harmful to the environment and produces eight to 10 times more waste rubble than underground mines. Opt for recycled gold, which is the same quality as a newly mined metal without damaging the ecosystem.

The majority of grooms are taking tradition to heart when they propose. In fact, 77% of grooms proposed on bended knee  and 71% asked the bride’s parents for permission before popping the question. Over forty percent of grooms meticulously planned the proposal down to the last detail and only 10% of grooms “winged” it. San Francisco is the perfect location for a Destination Engagement which are also on the rise.

Photographs can be taken at a location of your choice. Whether it be the place where you first met, where you shared your first kiss, or a place you frequently visit that has become a favorite spot, it has sentimental value. It’s personal. It’s intimate. And it shows in the photos. The photo’s taken can be used for your wedding announcement and wedding day.

Where To Shop For Wedding Rings In San Francisco 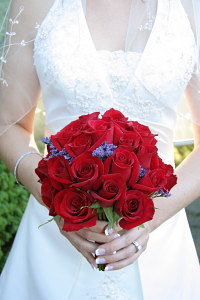 Something Old, Something New, Wedding Tradition

This superstition of the Bride wearing something that fits each of these four categories originated in Europe to ward off evil spirits.

Something Old:  Symbolized the sense of continuity while making the transition from a single person to that of a married couple.

Something New:  Symbolized that marriage represented a transition to adulthood.

Something Borrowed:  Symbolizes the popular belief that by borrowing something from a happily married couple, good fortune would follow the newlyweds.

Something Blue:  In ancient Israel, blue was the border color of the Bride’s dress symbolizing purity, constancy and fidelity.

Brian and I would like to take this opportunity to say thank you for being such a special part of our wedding day!  Thank you for helping us start this chapter of our lives with such inspiring and caring words.  So many people have told us since the wedding how much they enjoyed our ceremony as well.  We got a lot of wonderful comments about how comforting your words and voice were!  We were glad to hear that they enjoyed you for the same reasons Brian and I did!  We were glad to hear that our guests were touched as much as were by the ceremony!  Thank you again!  Brian & Amanda Gibson 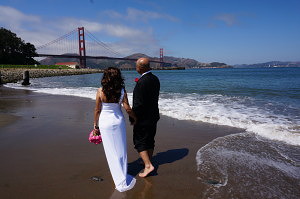 Getting married in the United States, most couples are in their early 30’s.  With an average engagement ring costing $6,000 and the length of engagement lasting 14 months most engagement happen in December.  They will declare their love today with an average wedding costing $29,858 with the most popular months being June & September. Followed by the average honeymoon of $4,000.

Coast to Coast – The average cost of a wedding in New York City (Manhattan) is $86,916 while San Francisco is less than half the cost at $33,836.  The top wedding city in the world is Istanbul, Turkey with 166,000 yearly weddings followed by Las Vegas, Nevada with 114,000 weddings annually. 2.3 million couples wed every year in the US. That breaks down to nearly 6,200 weddings a day.

Stateside destination weddings, with friends and family are planned as three-day weekend events and are a new trend in weddings.  Destination Weddings now account for 24% of all weddings.

Casual weddings are also on the rise, with 17% of brides classifying their weddings as casual in 2013.

Institutional weddings drop, couples aren’t marrying in religious institutions as much as they used to; just 33% chose to do so in 2013, down from 41% in 2009. 57% of couples hired a professional ceremony officiant.

Seasonal shifts, the trend toward beautiful summer weddings is shifting. In 2013, 35% of couples opted for sunshine-filled nuptials, down from 2009 when 41%. With fall coming in as a close second at 32%. Spring is gaining traction at 26%. 7% choose a winter wedding in 2013. June is the most popular month for weddings, then August, followed by September and October.

Sources for statistics: US Census Bureau http://www.census.gov/Press-Release/www/2003/cb03ff02.html -The Knot http://www.theknot.com/au_industrystats.shtml 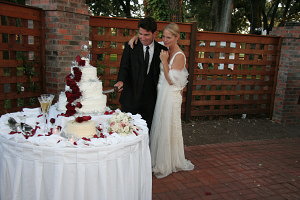 A Slice Of Life

In the days of the Roman empire, wedding cakes were baked of wheat or barley.  At the reception, they were traditionally broken over the head of the new Bride by the Groom as a symbol of her fertility. Guests would then scramble for pieces of the cake, and take them home for good luck.  It later became a tradition to place many small cakes on top of each other as high as possible.  The newlyweds would then try to exchange a kiss over the top of the tower of cakes without knocking them down. It was during the reign of King Charles II of England, that icing was added.

The overall theme has become to share something sweet to mark the sweetness in your marriage. This sweet can be anything. You could share a chocolate truffle a favorite candy. This opens a world of possibilities over an expensive wedding cake. Traditions change and shift make your uniquely yours.

Thank you so much for performing such a beautiful ceremony, everyone was talking about how wonderful  it was, we could not have done it without you.  We both had such a wonderful time and can not believe is over.  Sharen & Chris